As the busy mamas that we all are, nothing is more luxurious than a hands-off dinner that is not just simple and delicious, but also involves minimal clean up! While I originally named this the Twice Baked Easy Breezy Three Cheesy Spaghetti Squash(y), we can keep it as simple as the recipe and just call it “Three Cheese Spaghetti Squash”. 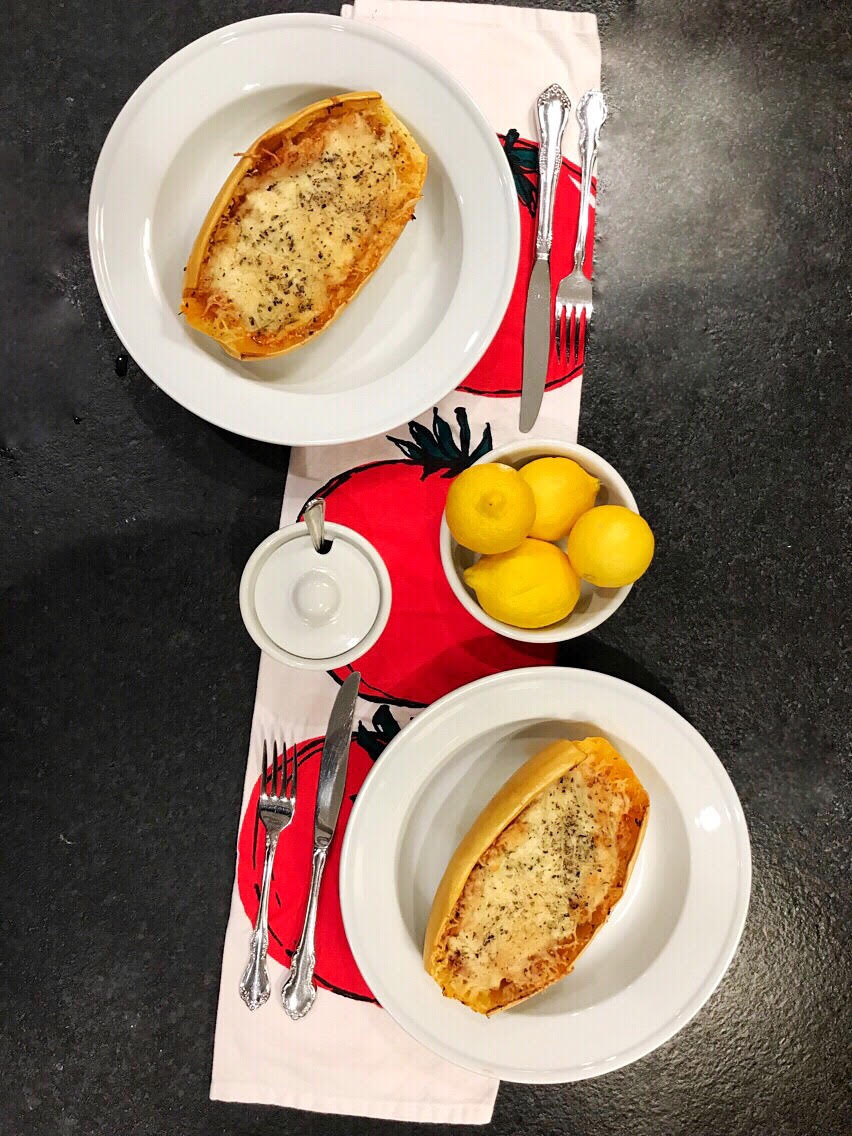 Spaghetti squash, in my opinion, is one of those magical vegetables that is healthy, tasty, extremely easy to cook, and a bit fun to prepare. The other thing? It’s a great alternative to pasta dishes. (Yes, we know, who could replace the holy grail of pasta? We can, and so can you. Get excited.)

Now that we are over the fact that we are substituting pasta (you’ll thank us, we promise), the next hurdle is the daunting fact that you are cutting and cooking an entire squash. But, my fellow Mamas, do not fret your frazzled little heads, for it is not as difficult as it seems. 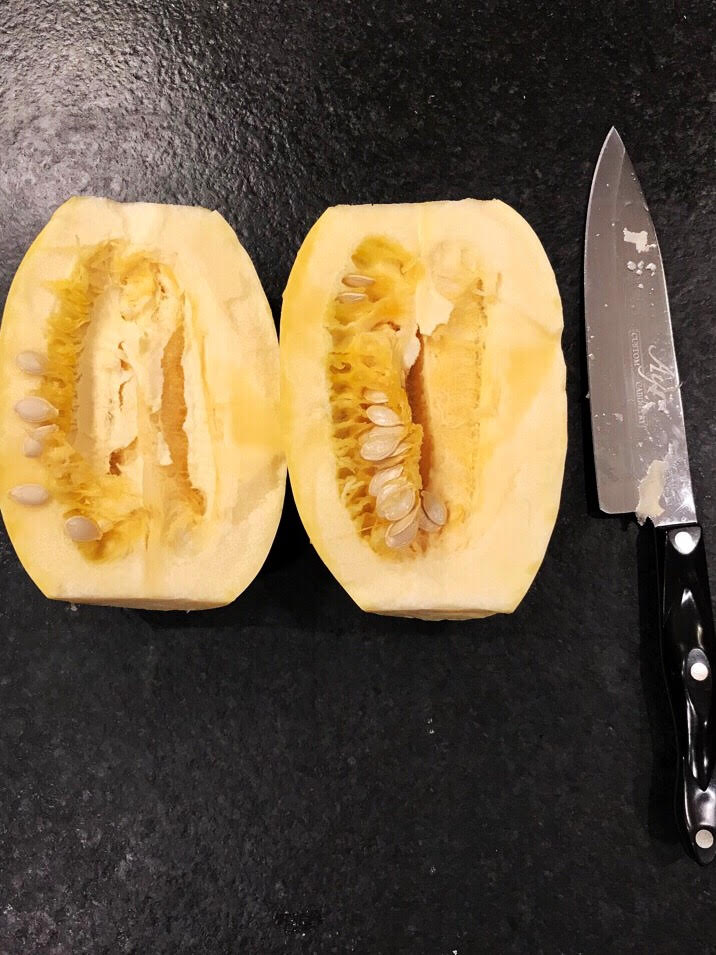 After the squashes are cut, right away you will notice that it looks a bit like a pumpkin inside. Because of that, you will need to scoop out the “guts” with a spoon. Pro tip: save the seeds, dry them, toss them in olive oil (or butter!) and salt, and roast them at 300 degrees F for 45 minutes in an even layer on a baking sheet. This is a delicious snack to munch on for a few days! 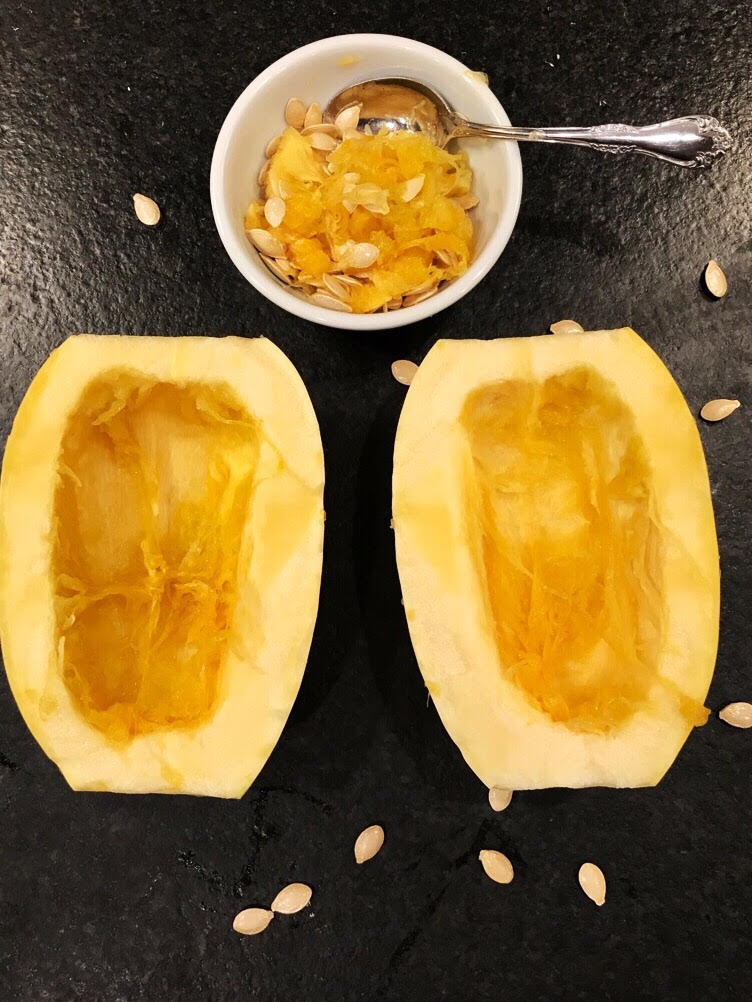 I would say that that was the hardest part of the recipe, but honestly there is no hard part.

Next, lay parchment paper or tin foil over two baking sheets (hence the easy clean up) and place two halves on each sheet, cut side down. Bake at 375 degrees F for 45 minutes or until you are able to pierce the skin easily with a fork. 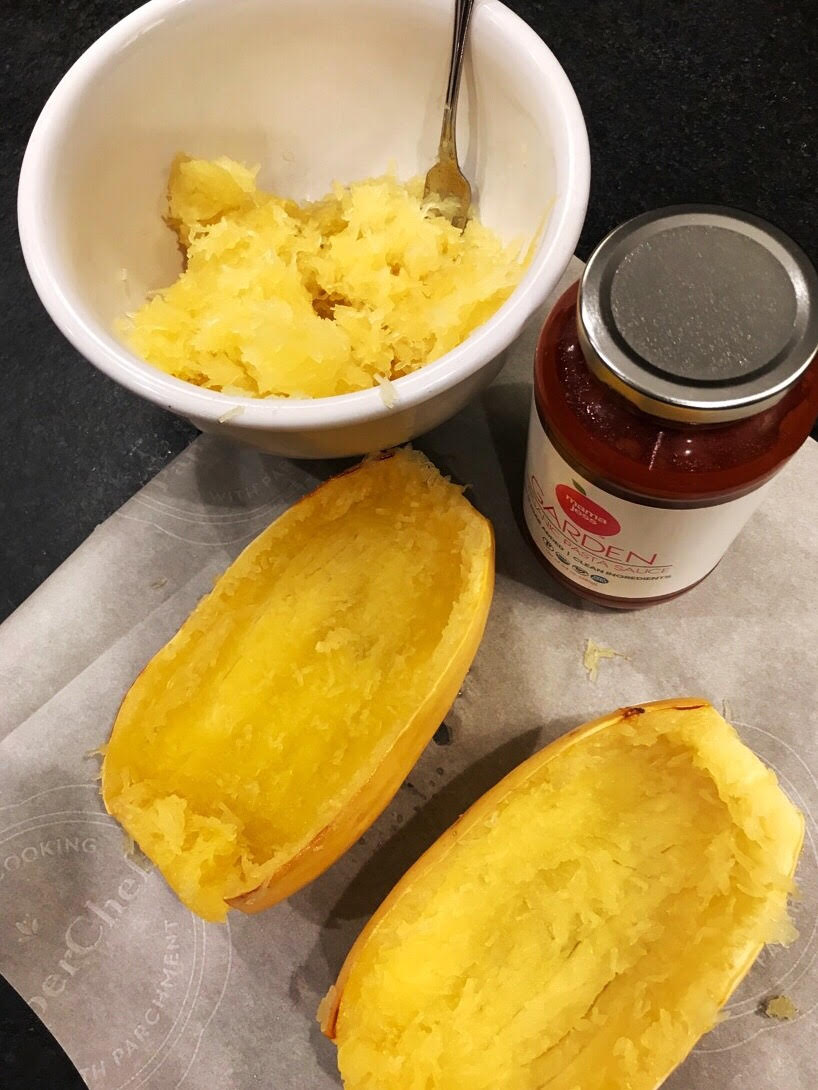 Now comes the fun part. After allowing the squashes to cool to the touch for about 15 minutes (it helps if you flip them so they cool cut side up), use a fork and separate the strands by scraping along the inside of the squash down to the skin, allowing the shell to remain intact. Put the strands into a bowl. Add about a half of a jar of Mama Jess Garden Pasta Sauce to the strands, and salt and pepper to taste. Gently mix this together, avoiding mashing the strands or breaking them. 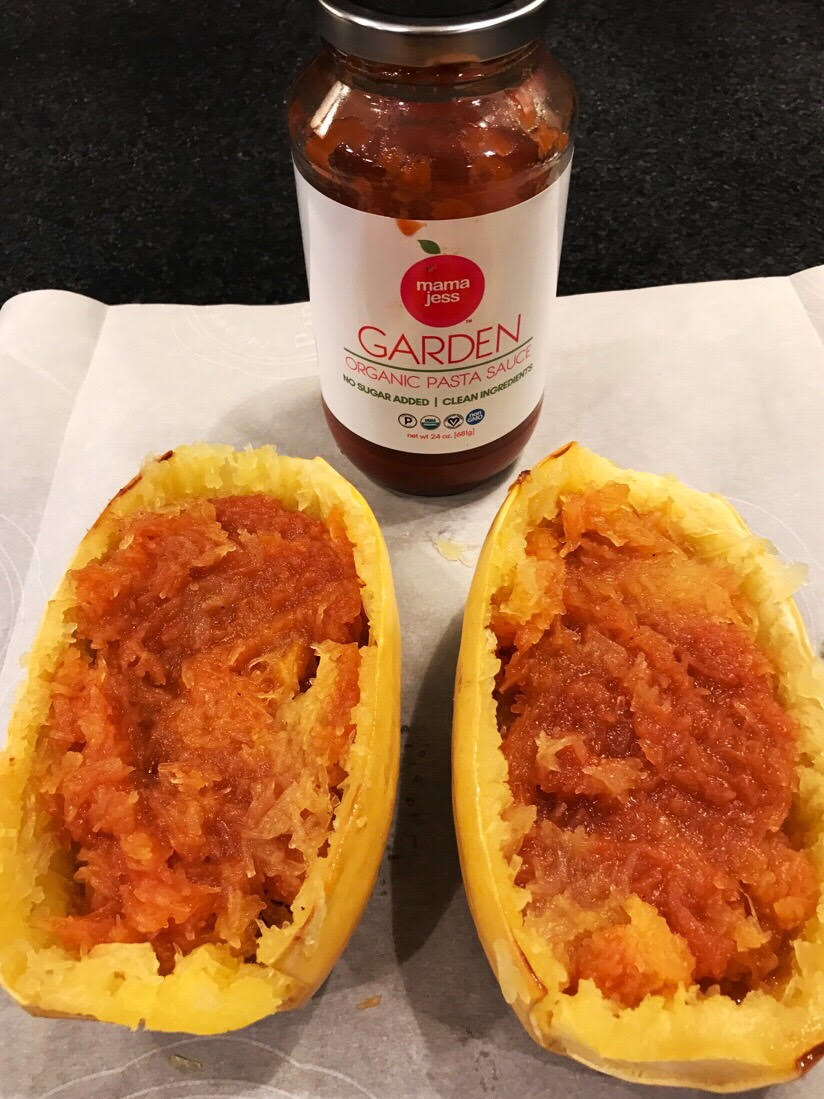 If you craving a bit more substance to this recipe, feel free to cook up some ground Italian sausage while the squash is baking and mix it in at this step. It will be delicious! 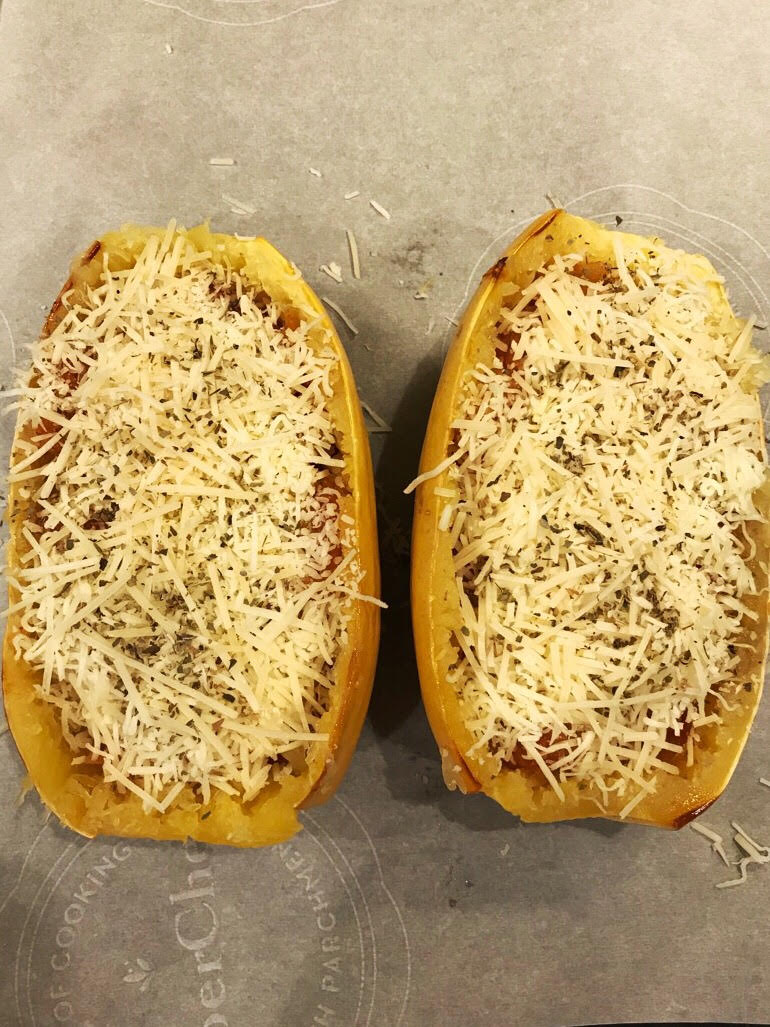 Evenly separate the mixture between the four shells back on to the baking sheets. Next, sprinkle your shredded mozzarella, asiago, and parmesan cheeses on top. I am fondly known as the Dairy Fairy in my house because I do quite a lot of cheese sprinkling. So just add however much you think your family would enjoy! Finally, top with basil and oregano flakes. You can even get a little spicy and add some hot red pepper flakes!

Throw the four shells back into the oven for about 8-10 minutes, or until the cheese is bubbling and a bit brown and crunchy on top. Let cool, and serve directly from the shell! 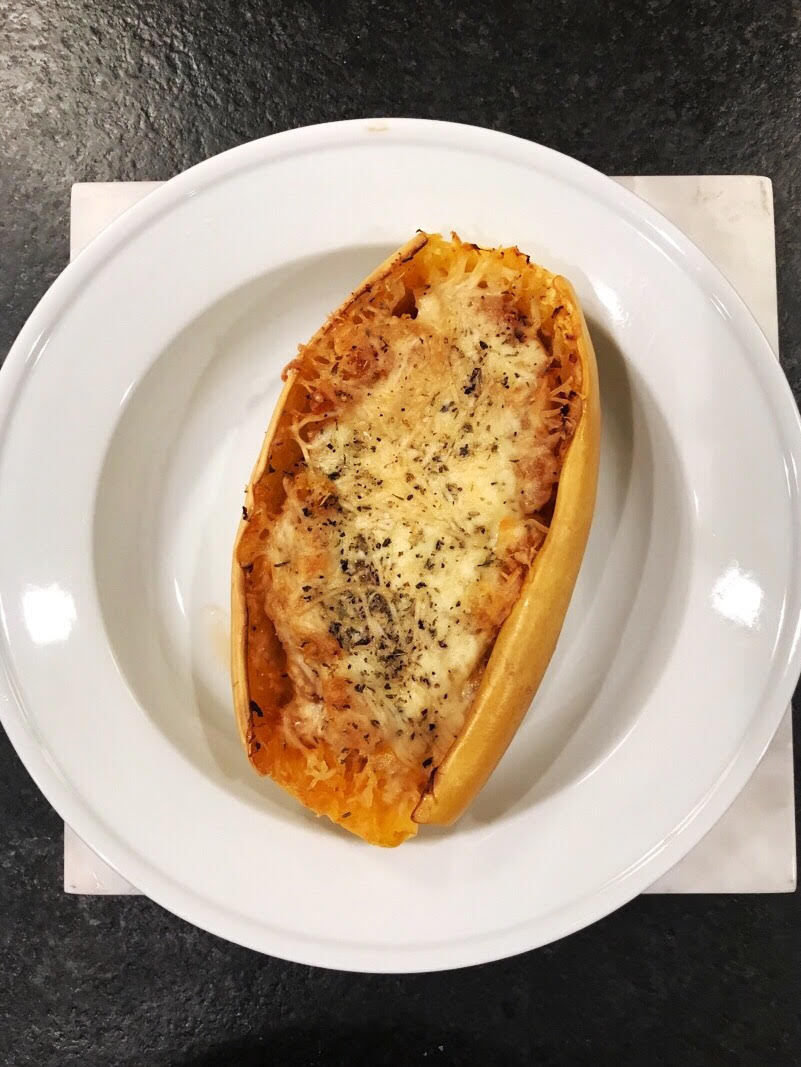 Are you an avid spaghetti squash fan? What are some other recipes that you would like to see posted using this wonderful squash? Let us know by contacting us at info@mamajess.com or commenting on our Instagram posts, we love to hear from you!